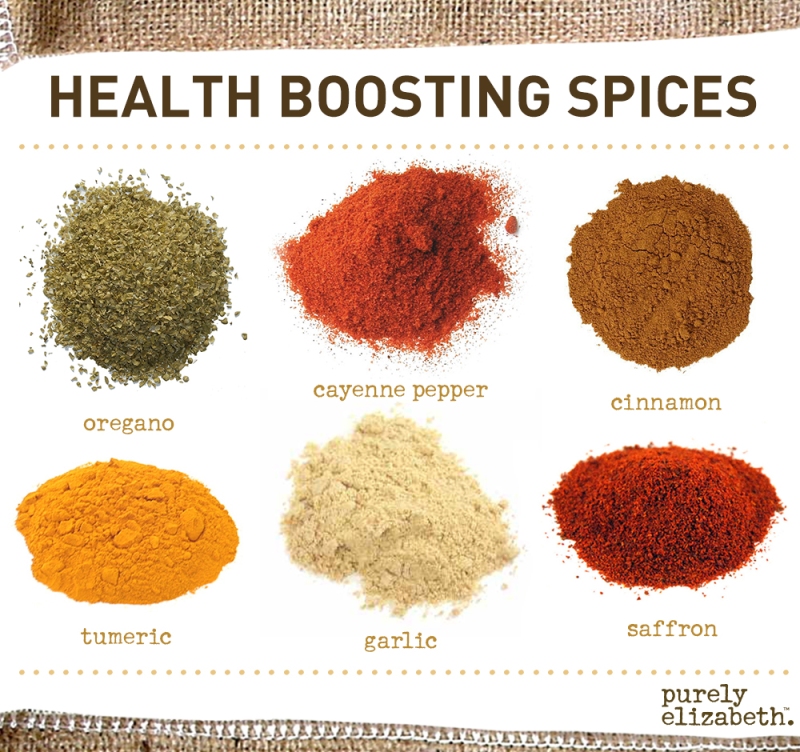 A spice is an aromatic dried seed, fruit, root, bark, or vegetable substance primarily used for flavoring food. While adding variety and flavor, spices are also a great source of vitamins, nutrients and antioxidants. Studies show that many spices contain healing powers and are often used for medicinal purposes. Here are some of our favorite spices with health boosting properties:

Oregano- Oregano contains essential oils, along with the ingredients thymol and carvacol, which may boost your immune system and protect from certain strains of bacterial infections. Oregano is also rich in vitamins, nutrients and antioxidants.

Cayenne Pepper- Cayenne peppers are rich in capsaicin, a compound found primarily in chili peppers, which has been shown to reduce inflammation when applied topically. Cayenne peppers are also rich in beta-carotene (otherwise known as Vitamin A and the cause of it’s bright red color), along with antioxidants.

Cinnamon- Cinnamon contains iron, calcium, manganese and fiber. Cinnamon has also been shown to have an effect on regulating blood sugar for people with type 2 diabetes and aids in reducing bad cholesterol.

Tumeric- An orange spice that is a major ingredient in Indian curries and has been used for centuries in India’s Ayurvedic remedies, tumeric contains the compound curcumin, which has powerful healing and anti-inflammatory abilities. An overview published in Advanced Experimental Medical Biology in 2007 states that, “Curcumin has been shown to exhibit antioxidant, anti-inflammatory, antiviral, antibacterial, antifungal, and anticancer activities and thus has a potential against various malignant diseases, diabetes, allergies, arthritis, Alzheimer’s disease and other chronic illnesses.”

Garlic- Garlic contains Vitamin C, potassium, phosphorous, selenium and amino acids. It also has been shown to stimulate immune response and reduce inflammation. According to Leo Galland, MD, board-certified internist, author and internationally recognized leader in integrated medicine, the components in “garlic called allyl sulfides and bioflavonoids may be key to the research observations of generally lower incidence of cancer and heart disease in people who consume large amounts of garlic and onions, compared with those who eat less.”

Saffron- Saffron has been used in Chinese medicine to improve blood circulation and cure bruises. It contains an ingredient called crocin which may also lower blood cholesterol and triglycerides in the body, help treat atherosclerosis and arthritis and promote learning and memory retention. Saffron also contains carotenoids, which are believed to inhibit skin tumors and improve eye and vision health.

Visit our Facebook page + tell us what your favorite spices are for a chance to win a sample of our brand new ancient grain granola bars!